TAKING PHYSICS TO THE HEART OF VENDA (The NSW2016 WITS Report)

TAKING PHYSICS TO THE HEART OF VENDA (The NSW2016 WITS Report)

TAKING PHYSICS TO THE HEART OF VENDA

On August 09th, a team from the School of Physics set out on a journey to celebrate the National Science Week with high-school learners from Venda in Limpopo, a six-hour trip away from Braamfontein. We were booked at Vhafamadi bed-and-breakfast in Thohoyandou, where we enjoyed a good night sleep before the long first day of our outreach trip. 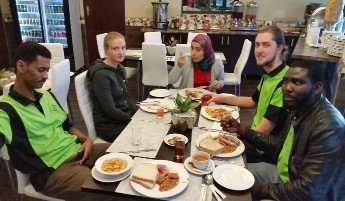 The Wednesday started with a good breakfast and a few selfies to light-up the morning, before heading off to the Mukula High school, half an hour away from the hotel. Upon arrival, we were greeted at the entrance of the school by a bright hot sunshine and the Chief of the area, Mr Takalani Rudzani, who led us inside, where we met the school Principal and other

member of staff for a brief introduction and discussion about the program of the day. 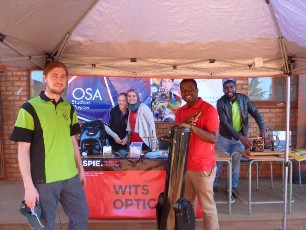 We proceeded to the courtyard to get ourselves set up. Meanwhile, some of the learners present in the yard had started the preparations for the ceremony that was to be held to kick-start the Science week. It wasn’t long before we caught the attention of the students congregating into small groups, observing us and probably wondering what was in the boxes we were off-loading from the car. They were certainly curious about the black telescope under the centre of the tent, but too shy to approach any of us to ask

about it. All they needed was a little push, and it was exactly what we gave them. We quickly 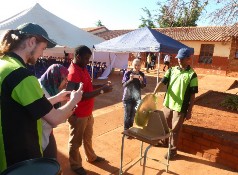 excited their inner pyromaniac self by using focussed sunlight to burn a piece of paper and explode balloons, just a taste of what we had in store for the day. Two brave souls, then five, then ten, the group around us grew in an instant. From science experiment, we quickly digressed and the morning turned into a photoshoot and we were more than happy to oblige; and why not? They were obviously bored with the long wait and we all had, from the looks of things, a good couple

of hours to burn. The girls were clear the stars of the show; against their superior social skills were outclassed and relegated to the role of photographer. We took advantage of the moment to thank our main sponsor, the South African Institute of Physics (SAIP), with a beautiful aerial shot. It took some effort but were able to get the student to crouch and arrange themselves to form the SAIP initials. This would have gone much easier had we been well verse in the dialect 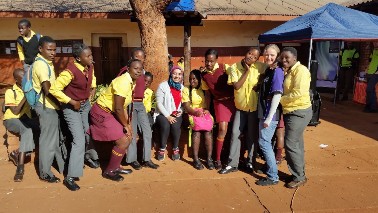 of the area. The result was definitely worth it. Everyone was pumped up and ready for the introductory ceremony that was about to start. We had naively all expected this would have been a quick matter and that we would soon get on with the demonstrations. We were clearly mistaken. From the students directing the ceremony for the

day, Chief, Pastor, to the Circuit Manager, everyone seemingly had a lengthy speech prepared. 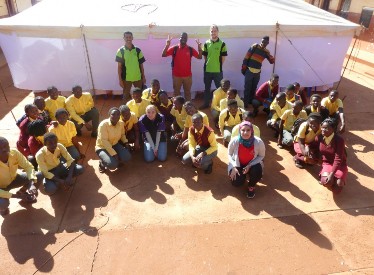 This tedious exercise may have, at first, seemed pointless, until one puts the events in context. The National Science Week was not simply an annual gathering; it was much more: a moment to remind the students of the approaching exam deadline, an opportunity to motivate each other, and more importantly, the perfect time to show them that a career in science is a fulfilling and rewarding. As their predecessors on the tortuous path that is life, we had a major

part to play in realising some of these ideals behind the National Science Week. I confess

feeling shocked when, in a motivational speech, one student in the entirety of the five schools that had assembled, raised his hand when I asked: “Who amongst you wants to be a scientist”. In private discussion later, I was relieved to know that there were more students interested in science, too shy to raise their hands. Though many of them had a penchant for the job of politicians: “They make a lot of money” some of the students told us; a natural feeling from their daily realities. Nevertheless, it was a sign that our role here was crucial.

Two hours later, when the litany of speeches was over, we had enough time to grab some lunch and begin with the demonstrations: bending light with lenses onto balloons, focussing the 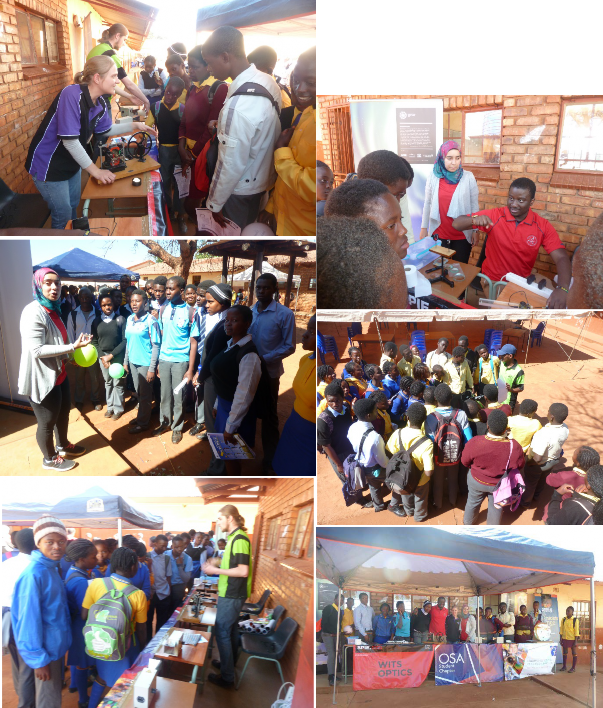